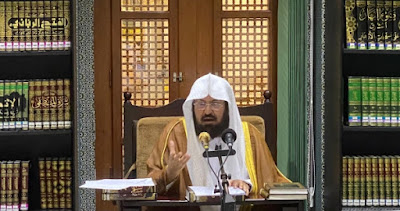 His Excellency the General President for the Affairs of the Grand Mosque and the Prophet’s Mosque Sheikh Professor Dr. Abdul-Rahman bin Abdulaziz Al-Sudais gave a lesson from the book of fasting in the chapter (Explaining Judicial Rulings for Fasting.

His Excellency indicated the necessity of not delaying making up until after the last Ramadan without an excuse, based on that by the words of Aisha, may Allah be pleased with her, saying (I used to fast in Ramadan, and when I could not, and I would not make it up except in Shaban, in the place of the Messenger of Allah, may Allah bless him and grant him peace) and if he delayed Making up the fasts until the new Ramadan, so he fasts the present Ramadan and makes up what is after it.

His Excellency said that if the one who has to make up the fast dies before the beginning of the new Ramadan, then there is nothing for him because he is delaying it during that period in which he died, and if he died after the new Ramadan and his delay was for an excuse such as sickness and travel, then he does not have to do it as well, and if his delay was without an excuse, he must offer expiation for his inheritance about feeding a poor person for every day.