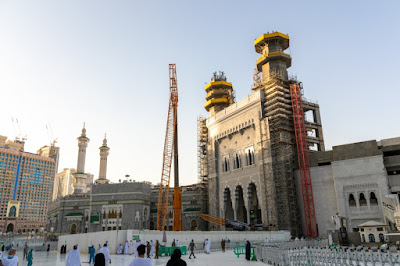 MAKKAH: The General Presidency announced that 45% of the construction works in the two Minarets of King Abdulaziz Gate was completed, whereas 42% in the two minarets of the Umrah Gate, and 37% of the work of the Fath Gate was completed during the period of suspension of Umrah and prayer in the Grand Mosque due to the Corona pandemic.

Al-Ahmadi stated that the percentage of completion of the construction and finishing works in the two Minarets of King Abdulaziz Gate amounted to (45.15%), and the marble columns and walls were completed at (90%), and the gate ceiling was installed at (80%).

As for the minarets of Bab al-Umrah, the percentage of work was completed at (42.38%), circular and square columns were installed at a rate of (15%), and the marble columns and walls were completed by (40%), while the completion of the Bab al-Fath Minarets reached (37.12%).

Al-Ahmadi added that the completion rate for Bab Ismail exceeds (36.40%) in the southern façades, in which the installation of precast concrete by (100%) and marble works for the façades by (25%) were completed, while the northern façades (36.74%) were completed.

He concluded by thanking His Excellency the General President for the Affairs of the Grand Mosque and the Prophet’s Mosque, Sheikh Prof. Dr. Abdul-Rahman bin Abdulaziz Al-Sudais, and the Under-General for Engineering Projects and Studies, His Excellency Eng. Sultan bin Ati Al-Qurashi, for their follow-up and constant interest in the construction and maintenance work, and the provision of the finest and best tools for the safety and comfort of my destination The Grand Mosque, especially the sites of the third Saudi expansion projects and the elements associated with them, in order to fulfill the aspirations of the rulers of the matter – may Allah protect them – especially in light of the care and attention that the Grand Mosque finds from our wise leadership.