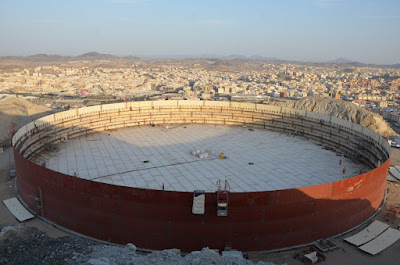 The Vice Presidency for Projects and Engineering Studies, His Excellency Eng. Sultan bin Ati Al Qurashi inspected the functioning of the strategic water reservoir feeding the Grand Mosque and its facilities, and was accompanied by the Assistant Director General of Projects.

Al-Qurashi stated that this reservoir is considered one of the most important strategic projects in infrastructure services for the third Saudi expansion project of the Grand Mosque and its facilities, which will be used during the holy month of Ramadan 1442 AH.

His Excellency indicated that this strategic reservoir has a volume of 140,000 cubic meters, with a diameter of 100 meters and its base and wall are made of iron and the roof is made of aluminum.

It is considered a strategic reservoir for the Haram only, and it will be linked to the old concrete Malakan reservoir with a capacity of 80,000 cubic meters, and the diameter of the pipelines from the reservoir to the Haram is 800 meters.

About 93% of the pipelines have been completed, and the reservoir is supplied with water through the water station in the Third Ring Road and then to the pumping station in the Al-Kaakiya neighborhood, in order for the pumps to raise the water to the tank to the mineral above the mountain and from the mineral reservoir to the Grand Mosque and its surrounding facilities.

Saudi Arabia to look for Shawwal Crescent on Friday