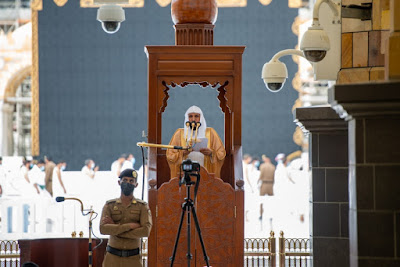 A brief extract from the Sermon delivered by Sheikh Maher Al Muaiqly in Masjid Al Haram, Makkah on Friday, 18 December 2020

Sheikh Maher: “O Believers, I call myself and you to accept the decree of Allah, to thank Him in happiness and have patience in sadness because without a doubt Allah is indeed gracious upon His servants. He awards those who remember Him in happiness, in sadness, in sickness, in health. Indeed those who observe Taqwa are among the successful”

The Prophet (Peace be upon Him) at many occasions reminded the believers that “Allah loves you, Allah loves you more than the love of 70 mothers”.

The purpose of Humans in this world is to worship Allah, to accept his commandments, and follow his decreed laws and not exceed the limits He set.

The purpose of sending messengers was to guide the servants about their Lord, with His supreme qualities and his beautiful names, so that the servants will be sincere in His unification, love and obey Him, and keep away from His disobedience and contradicting his command. The Qur’an says “Allah is the One Who created seven heavens in layers, and likewise for the earth. The divine command descends between them so you may know that Allah is Most Capable of everything and that Allah certainly encompasses all things in His knowledge.”

Whoever believes in the kind names of Allah knows that every afflicted (trial) person comes to know the meanings of them, peace elevates him to levels, The Prophet (Peace be Upon Him) said: “A Muslim, male or female, continues to remain under trial in respect of his life, property and offspring until he faces Allah, the Exalted, with no sin record”. Al Tirmidhi