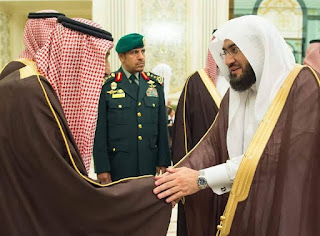 Imams of the Haramain and other prominent Scholars met the Custodian of the Two Holy Mosques, King Salman in Riyadh on Monday.

Sheikh Saud Al Shuraim, Sheikh Faisal Gazzawi and other Imams of Masjid Al Nabawi did not visit as they were on duty leading prayers in the respective Masjids