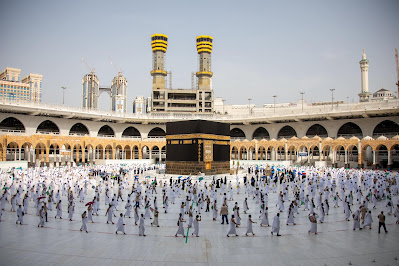 As per the royal order issued by the Custodian of the Two Holy Mosques on Saudi National Day, the gradual resumption of Umrah will begin tomorrow i.e 4 October 2020.

Also read: How to obtain an Umrah Permit?

The General Presidency for the Affairs of the Two Holy Mosques announced some new protocols for the operations and handling of the Umrah which included some of the following points:

2. The timings of Umrah each day will be from 7AM will 3AM (the following day)

3. High-resolution thermal cameras have been installed at all entrances to the Grand Mosque, with a ban on i’tikaaf and bringing in food and soft drinks into the mosque.

4. Tawaf will begin in a spiral way and the pilgrims would directly proceed to masa’ (area for the ritual of Saee between Safa and Marwah) after completion of tawaf and will exit the Grand Mosque through the gates of Marwah and Arqam after completion of Sa’ee

5. The the first track of the mataf will be earmarked for wheelchairs of the elderly and people with special needs.

6. The pilgrims will be guided in separate tracks from outside the Haram to the Mataaf and there will be 16 leaders who will receive the pilgrims at the courtyards and direct them to the Grand Mosque.

A presidency official said that the Grand Mosque will be completely washed 10 times a day before and after the performance of Umrah by the groups of pilgrims.

He also said that all toilets will be washed and sterilized six times a day. Carpets, wheelchairs, and escalators in the Grand Mosque will be regularly sterilized. Cleaning of air-conditioning systems and air filters will be done with ultraviolet rays a number of times in a day.