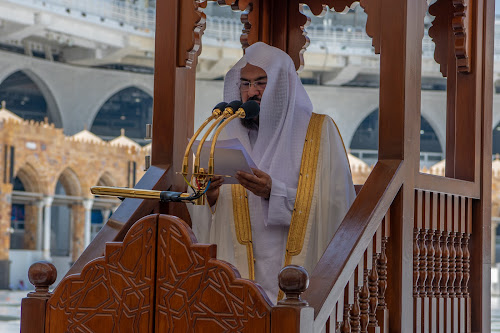 Following the Sermon delivered by Sheikh Abdul Rehman Al Sudais on 16 Muharram 1442, certain people have taken the words of the honorable Khateeb out of context and presented in short clips giving the impression that the honorable Khateeb is out pushing an agenda to normalize stance towards certain countries’ cooperation in the political world.

After the posting of such allegation and deriving context on their own scores of people started to call out the Khateeb left and right not realizing that they have become victims of propaganda aimed at defaming the of the Imams of the Haramain.

The main topic of the Khutbah was regarding Tawheed, where the Khateeb spoke about the basis of Tawheed and the allegiance to the worship of Allah Alone. The Khateeb also then spoke about the generations of Hanifs who worshipped Allah alone but major people deviated from the true path and embraced Shirk (associating partners with Allah) including the Christians and Jews.

The Khateeb further spoke regarding maintaining good relations between people of different religions and spoke about different alliances of Prophet Muhammad (PBUH) made with Jews in Madinah and “Maintaining sound conduct prescribed by Islam keeps people’s hearts together and even leads people to accept Islam”.

The Khateeb also spoke about the issue of the occupation of Palestine and occupation of the first Qibla of Islam Masjid Al Aqsa which the propagandists totally failed to even mention to draw more hatred. The Khateeb described the occupation as the “utmost priority to the people of Islam” and called on leaders to “make an upmost priority to Tawheed, and rectifying the circumstances of our Ummah, maintaining its unity and ridding it of ills.” He also said that the issue “must not be forgotten amidst new struggles that occur.”

The General Presidency of the Affairs of the Two Holy Mosques through the efforts and leadership of the President Sheikh Abdul Rehman Al Sudais has made it possible for people around the world to listen to Jummah Khutbah from the Haramain Sharifain in their language every week. Muslims should take advantage of this service provided and must not heed to “Fake News”, “propaganda” and attempts of causing distrust and disunity in the Muslim Ummah. All information should be taken and asked from authentic sources.

Vaccination against COVID-19 a major condition for participating in Hajj: Health Minister