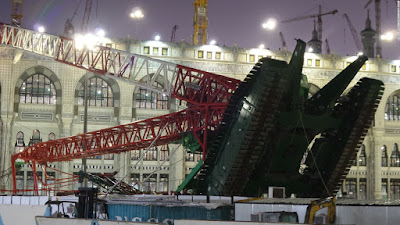 On a hot and humid afternoon when the guests of Rahman were busy performing their rituals in Masjid Al Haram, Allah sent his mercy in form of rain and cool winds reducing the temperature of the city by almost 15 degrees.

Shortly after Asr Prayers when sounds of “Labaik Allahuma Labaik” were echoing in the Haram along with the heavy downpour, the Haram suddenly shook violently along with a crashing sound as if Lightning had struck the Haram.

Unfortunately as debris spread across the Mataaf the sheer reality became apparent, a Crane had collapsed amid thunderous winds and struck Masjid Al Haram.

The Grand Mosque was under the main phase of expansion when the incident took place.
The Horrifying scenes inside the Mataaf and the Masa’a soon found its way on social media and the Muslim world fell in grief.

The Crane slammed into the second floor of Masa’a and the Mataaf just short of the temporary mataaf bridge.

111 Hujjaj embraced martyrdom and 394 were injured some with permanent disabilities.
The Custodian of the Two Holy Mosques King Salman ordered an immediate investigation to determine the cause of the accident and also compensated the victims of the incident.

Sheikh Sudais Re-Appointed as the President of the Haramain