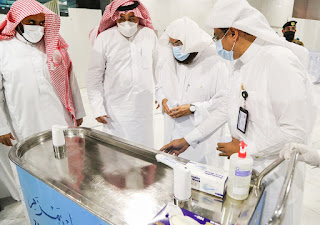 The Zamzam watering truck, made of rust-resistant stainless steel, contains two containers with a total capacity of 80 liters of chilled and non-chilled water, in addition to two electronic pumps that are continuously sterilized as a precaution for the safety of those visiting the Grand Mosque.

The vehicle is also characterized by its ease of movement inside the Mosque and in the squares with the aim of delivering water to all visitors, in accordance with the highest standards of safety, health and preventive precautions.

His Excellency indicated that the vehicles developed for Zamzam packages come within the framework of the General Presidency’s preparations to receive pilgrims and worshipers during the blessed Ramadan season, as all services in the Two Holy Mosques take into account the highest standards of safety and health protection.

No cases of Corona among 5 million Umrah performers