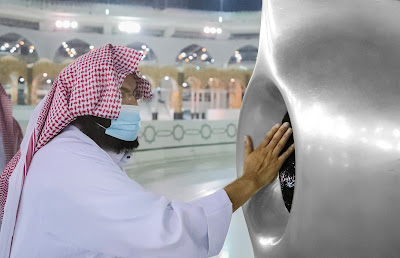 The officials of the General Presidency for the affairs of the Grand Mosque and the Prophet’s Mosque, headed by His Excellency the President Sheikh Dr. Abdul-Rahman bin Abdulaziz Al-Sudais was honored with the task of perfuming the Holy Ka’bah

This came after the periodic maintenance work on the sacred Ka’bah that was held earlier, and then the Black Stone was perfumed and committed with the finest kind of perfume, and the Holy Kaaba was also perfumed, in honor of the ancient House of Allah.

His Excellency participated in the perfuming of the Holy Ka’bah, His Excellency the Deputy President for the Affairs of the Grand Mosque, Mr. Ahmed bin Muhammad Al-Mansoori

It is noteworthy that the General Presidency for the Affairs of the Grand Mosque and the Prophet’s Mosque has established a special unit for perfume and incense, whose mission is to perfume the Holy Ka’bah and the Black Stone.

Summary and Extracts from the Jum’uah Khutbah from Masjid Al Nabawi, Madinah (1 January 2021)