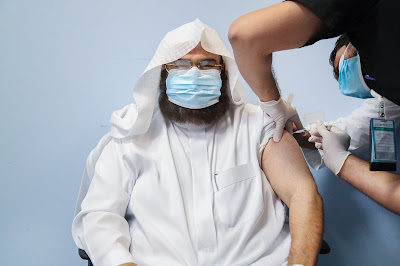 The General President for the Affairs of the Grand Mosque and the Prophet’s Mosque, Prof. Dr. Abdulrahman Al-Sudais, received the Corona vaccine, in the presence of the CEO of the Makkah Al-Mukarramah Health Cluster, Dr. Dilshad Ali Abbas, at the Corona Vaccine Center, King Abdullah Medical City.

Al-Sudais praised the efforts of the government of the Custodian of the Two Holy Mosques in providing everything that contributes to the service and safety of citizens and residents in the Kingdom of Saudi Arabia, appreciating at the same time the great role played by the Ministry of Health in providing all the needs of all residents of these blessed countries.

King Salman gifts 150,000 Mushaf to the Grand Mosque ahead of Ramadan

Vaccination against COVID-19 Mandatory requirement for Umrah in Ramadan

1.5 million ‘all vaccinated’ to perform Umrah during Ramadan