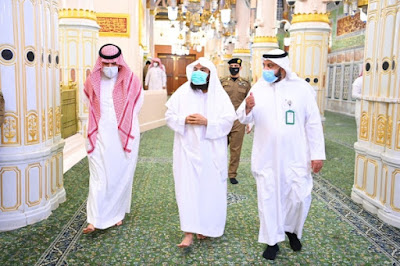 His Excellency the General President for the Affairs of the Grand Mosque and the Prophet’s Mosque, Sheikh Dr. Abdul-Rahman bin Abdulaziz Al-Sudais, made a field tour of Masjid Al Nabawi, to check the progress of work and ensure the completion of services in all its facilities following the necessary precautionary measures to limit the spread of virus Covid-19.

His Excellency met with the Agency’s employees in the Masjid, thanking them for their efforts, urging them to persevere and increase efforts to serve the visitors of the Mosque of our Holy Prophet, may Allah bless him and grant him peace, to provide the highest safety standards, and to work with the precautionary and preventive measures issued by the relevant government agencies and to adhere to them in the interest of the health and safety of everyone.

He also urged the presidency employees to provide the best services are and the means of comfort and reassurance is achieved, ease, ease, security and safety of visitors, and that the Presidency is keen on achieving the aspirations of the wise leadership.

He also inaugurated the new first aid boxes inside the Mosque in the presence of Director of the Emergency, Disaster and Crisis Department, His Excellency Mr. Awad Al-Enezi

Mosques in Kingdom to reopen with Precautions