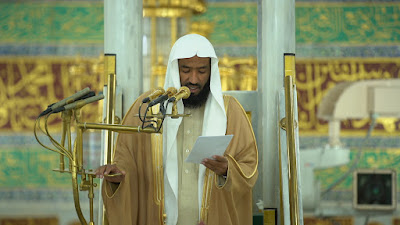 Summary and Extracts from the Jumu’ah  Khutbah delivered by His Eminence Sheikh Dr. Abdullah Bua’yjaan in Masjid Al Nabawi, Madinah on Friday, 25 December 2020

Topic: Winter is the Spring of Believers

The days used to be like a blazing fire. The summer was hot, the earth dried out, the cattle become skinny, the rivers dried up, the trees and crops died, the roses wilted, and the fruits decreased. Then, Allah changed the situation and send winds as good tidings before His mercy and send down the rain after they had despaired and spread His mercy, and He is the Protector, the Praiseworthy. Then the earth becomes after His permission, alive, beautiful, and colorful.

Reviving the earth with rain is a reminder of the resurrection. It is a reminder of the gathering of people and resurrecting them from their graves when the Horn will be blown. Winter for the believers is a spring and a great bounty. In it, they enjoy the gardens of acts of obedience and walk in the fields of acts of worship. They let their hearts enjoy the meadows of good deeds. In it, hardship and exhaustion decrease. There is no hardship in fasting, and the night is long so they can easily pray the night prayer.

[And of His signs is that you see the earth stilled, but when We send down upon it rain, it quivers and grows. Indeed, He who has given it life is the Giver of Life to the dead. Indeed, He is over all things competent]. –

Abu Hurairah -may Allah be pleased with him- reported that the Prophet (Praise and Peace be upon him) said, “Should I not direct you to something by which Allah expiates the sins and elevates (your) ranks.” They said: “Yes, O Messenger of Allah”. He said, “Performing Wudu’ properly, even in difficulty, frequently going to the mosque, and waiting eagerly for the next prayer after a prayer is over; indeed, that is Ar-Ribat”. ‘

From the flexibility of this Sharia and the wisdom of Islam, the religion of ease is that it eases matters upon the people during times of difficulty. Allah says He has not placed upon you in the religion any difficulty. The Islamic principles states, “Hardship brings ease.” (Allah says) Allah does not charge a soul except [with that within] its capacity. ‘Amr Ibn Al-A’s said: I had a dream in a very cold night on Thatul-Salasl battle. Then I feared for myself that if I bathe using water I would die. So, I performed tayammum and prayed Fajr prayer leading my companions. Then The Prophet peace and blessings be upon him was informed he told me “O ‘Amr, you led your companions in prayer while you were in a state of impurity (means due to his dream). I informed him of the cause which impeded me from washing. And I said: I heard Allah say: “Do not kill yourself, verily Allah is merciful to you.” The Messenger of Allah (may Allah’s peace and blessings upon him) laughed and did not say anything. [reported by Abu Dawood].

Vaccination against COVID-19 a major condition for participating in Hajj: Health Minister

Umbrellas to be installed in the Courtyard of Masjid Al Haram