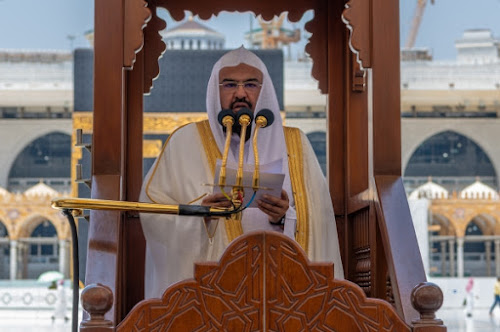 Imam and Khateeb of the Masjid Al Haram, Makkah, His Excellency the General President for the Affairs of the Grand Mosque and the Prophet’s Mosque, Sheikh Dr. Abdul-Rahman bin Abdulaziz Al-Sudais.

He mentioned at the beginning of his sermon: “O Muslims!, we have arrived in a new Hijri year, so open your year with sincere repentance from missteps and sins, and persevere in righteous deeds, and increase affection and obedience.”

O Nation of Tawheed! he first of what was mentioned by souls and preached by the hearts at the beginning of the year is the unification of the signs of the unseen, especially at a time of intellectual transformations and erosions, Many sects and their differences, and the straying of souls without the correct belief and its departure. We must take a serious stand, to look to the future and draw its horizons, and to inquire into its horizons and depths, in the light of pure doctrine, stable in the depths of darkness, for Islam, has come with the pure creed of monotheism;  “And the victory of the believers was truly over us”

And His Excellency continued: Allah created His servants the Hanifs, so the devil ravaged them about their religion and the paths of deviation and delusion were adorned for them. In the authentic Qudsi hadith, Allah Almighty said: “I created my servants who are all of them, and they accused the devils, so I turned them away from their religion.”

A matter of our Aqeedah to take note of is having a sound understanding of issues relating to allegiance. This includes having international relations and healthy dealings. These are factors that are mentioned in Islam’s basic teachings in governance and serving the interest of humanity. Maintaining sound conduct prescribed by Islam keeps people’s hearts together and even leads people to accept Islam. It is important that the leaders make an upmost priority to Tawheed, and rectifying the circumstances of our ummah, maintaining its unity and ridding it of ills. This is especially the case regarding the major causes of our ummah and at the head of them is the Palestinian cause and Masjid al Aqsa which has been taken, prisoner. This is an issue that is of utmost priority to the people of Islam and it must not be forgotten amidst new struggles that occur. It must be kept in mind but with no exaggeration in the media and battles in the rounds of electronic communications. Allah who is perfect in every way will inevitably bring about his promise, complete his light, remove adversity, and support the ummah.

Sheikh Sudais perfumed the Ka’bah and the Black Stone