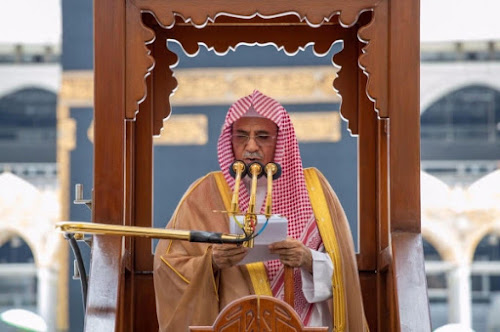 His Excellency Sheikh Saleh bin Humaid began his sermon with prayers and with Salutations upon the Prophet ﷺ said: “Whoever is blessed with Allah has cleared himself, and whoever entrusts himself to Him is sufficient, and whoever sells Himself to his Lord bought and made his shelter in Jannah”

The life of a person in this world is in stages, and the son of Adam in it is a resident and then departs, every breath he takes lowers his health and strength until he meets his Lord with the good: “That Day, you will be exhibited [for judgment]; not hidden among you is anything concealed.”

O Muslims!: “A year has passed and a year has begun, For those who have been righteous and have memorized the days are busy with the good, and grief for the one who has been negligent and has reaped nothing but pain and sorrow.”

His Excellency continued: There are stances with phrases and sermons issued by scholars and uttered by wise men, with a lesson in them with accountability stances, and the Muslim receives a year and bids farewell to another.

O Muslims of society!: “The world is fraught with affliction, treachery is described, and annihilation is known, its conditions do not last, and its people do not greet while they are in joy and blissfulness if they are in trouble, you shoot them with their arrows and bomb them with fire.”

The Noble Qur’an preserved your life, achieved your happiness, and explained to you your job: “Whoever will see does so for [the benefit of] his soul, and whoever is blind [does harm] against it.” ,

“Whoever does righteousness – it is for his [own] soul, and whoever does evil [does so] against it.”

“Whoever is guided is only guided for [the benefit of] his soul. And whoever errs only errs against it”

“And whoever withholds only withholds [benefit] from himself; and Allah is the Free of need, while you are the needy”

“And whoever commits a sin only earns it against himself”

This is the real and these are the liability limits: “Every person, for what he earned, is retained.”,

“Every soul, for what it has earned, will be retained”

And you will not excuse the default of others, Nor by the deviation of the deviants, nor by the let down of the disappointed.