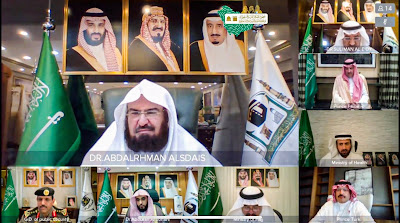 Participating in a symposium titled ‘The efforts of the Kingdom of Saudi Arabia in serving pilgrims and visitors during the Corona pandemic’ the President of the General Presidency for the Affairs of the Two Holy Mosques Sheikh Dr. Abdul Rehman Al Sudais said: “The pre-emptive measures taken by the Kingdom in fighting the Covid-19 pandemic has shown that the nation holds an exemplary position in crisis and disaster management; as well as in combating diseases and outbreaks. It has been able to do so with full ability, competence, and professionalism.”

The symposium was attended by their Royal Highnesses the Governor of Madinah and Asir as well as the Their Excellencies The Grand Mufti, Advisor to the Royal Court and Khateeb of Masjid Al Haram Sheikh Saleh ibn Humaid, The Ministers of Health, Hajj and Umrah and the General Director for Security