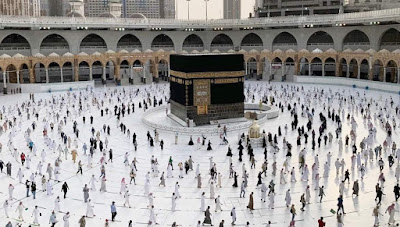 The General Presidency which oversees the affairs of the Two Holy Mosques issued some new protocols for the gradual resumption of Umrah from October 4th.

One of the main protocol was the continuation of barring access to the Ka’bah during Tawaaf. The pilgrims will not be able to touch the Ka’bah nor kiss the Black stone as a precautionary measure and barriers will remain around the Ka’bah

Some sources suggested to ‘Haramain Sharifain’ that women and men will be divided into different groups as we had seen during the Hajj season however this is yet to be confirmed by officials.

Among other protocols will be maintaining social distancing during Tawaaf as we have seen during the Hajj season. Pilgrims on any day during the first phase will be divided into groups of 12 and will be headed by a leader who will guide the pilgrims throughout their 3 hours of the allotted time. A health professional will also accompany each group.

The Presidency also announced that no one will be allowed to enter the Masjid without a valid Umrah permit.

The Sanitization department told that that Mosque will be sanitized 10 times per day and before and after the departure of each Umrah the group as well.

The President of the General Presidency Sheikh Abdul Rehman Al Sudais also announced the setting up an executive committee which will serve pilgrims and would have members from all institutions.

Saudi Arabia to look for Ramadan Crescent on Thursday

Remembering the Crane Accident in the Grand Mosque