The Kabah Washing Ceremony is an event which dates back to the time of Prophet Muhammad (SAWS). The Prophet (SAWS) used to wash the Kabah twice a year. First in Muharram and the other before the beginning of the month of Ramadan. The General Presidency of the Affairs of The Two Holy Mosques, keeping the Sunnah of the Prophet (SAWS) alive follows the same tradition year after year. The latest Kabah washing Ceremony was held today i.e 8th November 2015, This Article will tell you the chain of events which takes during the Ceremony

What is used to wash the Kabah?

The Day before the Ceremony, appointed members of the GPH makes washing liquid which is used to clean the Holy Kabah. The Liquid mixed together are usually: Rose Water, Oud, Itar (Perfume). The Quality of these Ingredients are top class and the cost may reach up to thousands of Saudi Riyals.

Who takes Part in the Wash?

Majority of the Muslim Ummah are often angry regarding the People Participating in the Kabah Wash. They feel it breaks the rule of the Haram when security guards keep away the local pilgrims and high officials only take part in it. If we think openly, then its quite impossible for all the people to participate in the wash, because at any time of the day there are at least 1000 people present. If they do then God Forbid accidental events can take place such as a Stampede

To solve this problem the General Presidency for the Affairs of the Two Holy Mosques, came up with a solution, They invite all the Ambassadors of all the Muslim Counties to participate in the Wash, which then in end concludes as if all the members of each Muslim Country and Community has taken part in the wash. 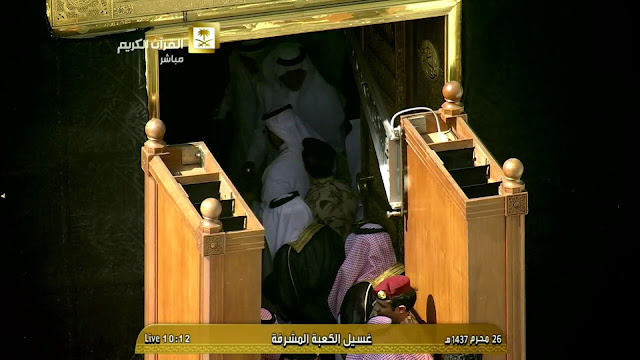 The Events of the Day

The Day starts with the Guards seperating the public from the Kabah forming a circle, first the Imams and the Muadhins of Masjid Al Haram visit the Kabah, then the elderly citizens and expats visit the Kabah , then the Special Guests who have been awarded by the Custodian of the Two Holy Mosques visit the Kabah.

Finally around Ten in the Morning the Governor of Makkah (At that time), the President of the GPH and the ambassadors of all the Muslim countries arrive and first pray 2 Rakah Nafil Prayer then wash the Kabah, it takes around 15 to 25 minutes to wash the Kabah

After the Wash, the officials make Tawaf around the Kabah. Tawaf consists of  seven round around the Kabah in an anticlockwise direction. Finally they pray 2 short Rakah prayer behind the Station of Ibrahim. Following the Sunnah of our Prophet (SAWS), the officials are served with Zamzam water in a bowl. The Ceremony then finally ends