Salat Al Khusoof and Salat Al Kusuf or Lunar Eclipse and Solar Eclipse Prayer  are one of the Sunnah Prayers offered by Prophet Muhammad (SAWS).

There many misconceptions out there and many Muslims unanimously believe that eclipse of the sun or moon occurs when a blessed is born or dies. But our Prophet (SAWS) is reported to have said:

"The Sun and Moon do not eclipse because of the death or life (i.e birth) of someone. When you see the eclipse  pray and invoke Allah" (Sahih Al Bukhari, 2.153)

Because our blog is specifically dedicated for the Haramain, we will explain the chain of events of the full Prayer 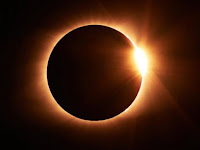 Sometimes a Prior Announcement is made a day before usually in Masjid Al Nabawi, after Salat Al Isha by the Imam explaining the importance of prayer and how to perform it.

Time of the Prayer: There is no specific time for the prayer, as it is performed when eclipse starts till it ends, usually for solar eclipse it is held during the day and lunar eclipse during the night.

On the day of the prayer, the Muadhin Announces that the following prayer is going to be held in Congregation as it was a Sunnah of the Prophet Muhammad (SAWS):

Narrated Abdullah bin  Amr : “When the sun eclipsed in the lifetime of Allah’s Apostle an announcement was made that a prayer was to be offered in congregation.” [Sahih Al Bukhari,
2.155]

The Imam then starts the prayer, the prayer consists of two rakahs (two units). The difference between normal Salah and the Eclipse prayer is that in each Rakah the Imam reads the Quran two times, one normally after Surah Al Fatiha and one after Standing up from Ruku. The Imam then concludes the prayer normally. After the Salah a Imam delivers a short sermon regarding the importance of prayer and addresses the current situation  of the Muslim Ummah and asks for Forgiveness from Allah

Here is a recent Salat Al Khusoof from Makkah: