Sheikh Sudais is probably one of the most popular Islamic personalities of the Muslim Ummah and almost every believer recognizes and loves his beautiful voice. Sheikh Abdul Rehman Al Sudais is the Chief Imam and Khateeb of Masjid Al Haram in Makkah. He is also the President of the General Presidency for the Affairs of the Two Holy Mosques (GPH), which makes him a minister.

Sheikh Sudais was born in the year 1961 in the City of Qassim, Saudi Arabia. He got his early education in Riyadh and by the age of 12 he had memorized the whole Quran under the supervision of Sheikh Abdul Rehman Al Firyan .

Sheikh Sudais graduated from the Faculty of Sharia in the year 1982, Completed his final years of Studies from Umm Al Qura University in Makkah and earned a PHD Degree in Sharia in 1995.

Since then Sheikh Sudais has been leading Taraweeh every year and in 2015, he completed his 35th time of completing the Quran and reading the Khatam ul Quran Dua.

In 2012, he was appointed as the President of General Presidency for the Affairs of the Haramain in a decree ordered by the Late King Abdullah of Saudi Arabia just before the Grand Expansion started in Masjid Al Haram

Sheikh Sudais is currently looking after the progress of the expansion in both Mosques in Makkah and Madinah, as the Expansion in Masjid Al Haram nears its completion. 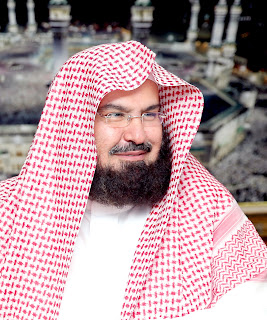 Masha allah. I am mohamed Abdulwahab from Somalia. I love the sheikhs voice and memorized the Quran by constantly listening to his recitations. May Allah grant him janatul firdaus.

Am kifayat ullah from Pakistan I love the sheikh voice when listening the holy Quran may allah grant him jannat a I would like to meet him .is it possible to me guide me please

Allahu Akbar, i really love sheikh for the sake of Allah and i wish to meet him one day Insha Allah, May Allah bless his life , increase in him good health and gragrant him jannah Amin. Your brother in Islam abdurrhaman Aminu Bello, sokoto north local government, sokoto state, Nigeria

Sheikh Sudais,
May Allah reward you for all that you have done for me and many others you don't know. You have impacted my religious life so much. I have a long story about me about me and my mom on how you helped me. Hopefully one day I can be able to narrate this story to you, insha Allah.
Mohammed Donzo

He's vocal sound & pronunciation are god gifted. So, May Allah bless you. I like you.