Sheikh Abdullah Awad Al Juhany is the youngest of all the Imams in Masjid Al Haram and was born in the year 1976, in the city of Madinah, Saudi Arabia. He completed the memorization of the Quran at a very young age.

At a very young age he entered in the Quran Recitation Competition which was held in Masjid Al Haram (and still is) every year and won the first prize.

He has four children, two sons and two daughters. Both of his sons are young and are memorizing the Holy Quran 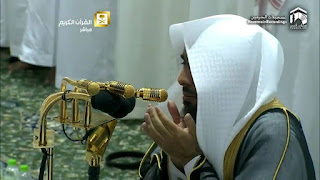 Sheikh Juhany has been blessed to be the only Imam who has led Salah in almost all significant Mosques in Islamic History, including Masjid Al Quba, Masjid Qiblatein, Masjid Al Jinn, Masjid Al Nabawi and Masjid Al Haram.

Here is a Video of his Leading Prayer in Masjid Al Haram :