Sheikh Saleh Al Talib, was born in Riyadh, Saudi Arabia in the year 1974.

He got his early education in Riyadh. He graduated from Imam Saud University, Riyadh and got a Masters Degree in Comparative Islamic Jurisprudence. He also has a Masters Degree in International Law from George Town, Washington DC, USA. Hence Sheikh Talib also understands English Language.

Sheikh Talib is also a Judge in the High Court of Makkah, the date of his appointment is unknown. He was appointed as the Imam and Khateeb of Masjid Al Haram in 2003 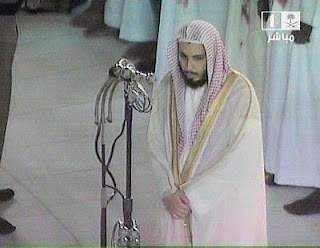 In July 2018, Sheikh Saleh Al Talib was suspended from leading Salats in Masjid Al Haram due to unknown reasons.

Last Salah led by Sheikh Talib before his suspension:

Can you please tell me why was sheikh suspended.or any clue

He was suspended because he talked about the bad deeds of aal e saud, he was bold and right.

May Allah bless you sheikh Saleh.
You are a true Muslim who had the courage to talk about the al saud family.