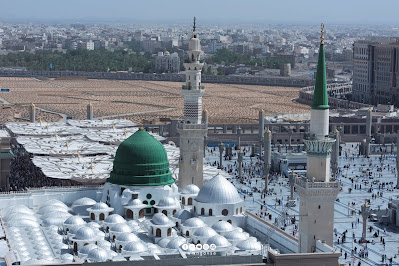 President for the Affairs of the Haramain Sharifain Sheikh Abdul Rehman Al Sudais launched the plan drawn up for Masjid Al Nabawi in Madinah on Thursday.

The President was in the city since Wednesday finalizing plans for Ramadan before heading back to Makkah.

According to the plans drawn up:

-The total capacity of worshippers in Ramadan will be 60,000 worshippers at one time (45000 inside and 15000 outside) under social distancing measures (inside and outside the masjid).

– Masjid Al Nabawi will close half an hour after Taraweeh prayer, and will reopen two hours before the Fajr prayer (except for the last ten days of Ramadan during which it will remain open 24/7).

– Praying in the Rawdah will be reserved for Imams, workers, and funeral attendees.

– Worshippers will be allowed to pray in the masjid, outside and on the roof. It will be regularly inspected.