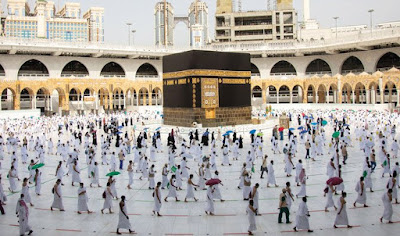 JEDDAH: Saudi Arabia’s Ministry of Hajj and Umrah said that more than 125,000 people had performed Umrah in the first phase of its return, confirming that no infections had been recorded among pilgrims so far.

“The first phase was completed successfully by last Saturday, where we received more than 125,000 pilgrims. The first phase only focused on Umrah, no prayers,” said Dr. Amr Al-Maddah, the undersecretary at the Ministry for Hajj and Umrah, adding that the Eatmarna app had been downloaded more than 2.5 million times so far.

In an interview with Al-Ekhbariya, he said the Grand Mosque had received 40,000 worshippers and 15,000 pilgrims in the second phase of Umrah.

There are 8,481 active cases that are still receiving medical care and 840 of these are in critical condition.

The country recorded 375 new recoveries, bringing the total number of recoveries to 329,270.

According to the ministry, Madinah recorded the highest number of cases with 59,

There were a further 16 deaths reported on Tuesday, bringing the Kingdom’s death toll to 5,217.

Saudi Arabia has conducted more than 7.45 million polymerase chain reaction tests so far, with 54,477 carried out in the last 24 hours.

The ministry’s Tetamman clinics in Hafar Al-Batin have so far provided services to 16,496 people through four clinics distributed across several health facilities.

In Riyadh, 229,501 people have visited 48 Tetamman clinics in the region. The Eastern Province recorded 146,955 visits across 16 clinics.

Tetamman clinics have been allocated by the ministry to serve anyone who shows COVID-19 symptoms, including a high temperature, accompanied by shortness of breath or coughing. The clinics are available to everyone, including Saudis, expats, and violators of the residency system.

Over 1.2 Million perform Umrah since resumption

Local Umrah to resume first but in ‘limited numbers’