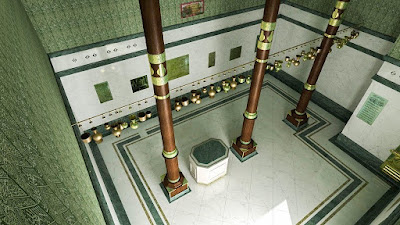 The Kaaba is situated in Masjid Al Haram, Makkah and serves as the Qibla (Direction) of Prayer for billions of Muslims worldwide.

The structure of the Kaaba has varied throughout history and has been rebuilt many times due to damage from floods or fires. The The current design of the Kaaba has been consistent which was established during the time of Prophet Muhammad (Peace and Blessings of Allah be Upon Him) who also reestablished the Kaaba for the worship of one God alone.

Kaaba has since become the symbol of Muslim identity and is featured and known to everyone throughout the world.

What is inside the Kaaba?

1.     The Kabah building is spread over 180 square meters and is of a cubical shape

2.     There are 3 wooden pillars which support the roof of the Kaaba

3.     There is also a staircase that leads towards the roof of the Kaaba and is situated on the right when entering the Kaaba.

4.     There are some artifacts dating from the times of the Umayyads, Ottomans, etc which are hung on the wall of the Kabah

5.     Some ancient lamps also hang inside the Kaaba which were used to light up in the past