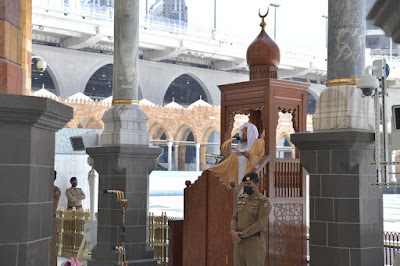 He began the sermon after praising Allah Salutations upon the Prophet (May Allah bless him and grant him peace), and said:

“In the midst of the pursuit of the realization of desires, the attainment of hopes, and the triumph of desires, people often overlook or forget that outcome of the pursuit might not be according to what he hopes, and therefore when he falls and is deprived of his desired outcome, the earth is narrowed upon him, his soul is restrained, and his rationality restricts him, and this leads to his decline and to a period of ingratitude to the blessings and previous blessings of Allah, so that he becomes burdened with worries, his soul becomes uneasy and he becomes unhappy with his life”

O Muslims, The reason for this is to misunderstand the truth of the misgivings of Blessings and the misunderstanding that both are not related and that both do not correlate.

Imam Sufyan al-Thawri, may God have mercy on him, quoted some of the predecessors (Salaf) saying: “Allah forbidding his servant from some of his beloveds is a gift from Him. Because Allah Almighty did not prevent him from stinginess, but rather prevented him with kindness”

The reality that every person lives in his life in order to establish the evidence and the clear proofs of the truthfulness and the validity of this who was conveyed by Sufyan, may God have mercy on him, so how many hopefuls if he had reached his hope and the consequence of his affairs would be a loser, and an end to what If he had won what he wanted, his victory would have been followed by a defeat that would drag its heels and swallow its bitterness. Therefore, the Almighty drew attention to the fact that a person often loves the fortunes of the world that is evil for him and wanders upon him, and he hates from them what is good for him and more worthy of him, so he dislikes you: “And perhaps you hate something, which is good for you, and perhaps you love something, and it is evil for you, and God knows and you not.”